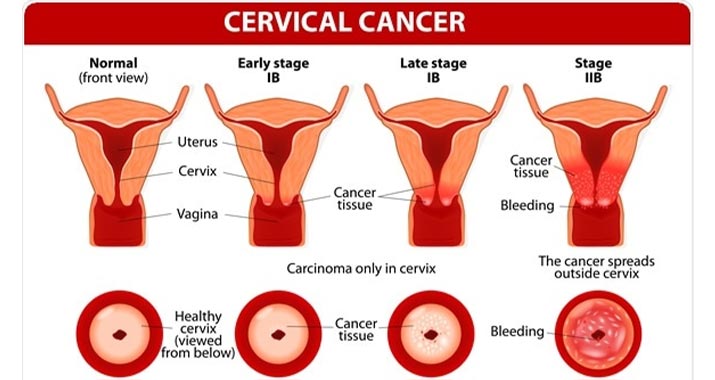 Majorly affecting women, cervical cancer is a cancer that originates from the cervix; the lower part of the uterus. In the United States, it is estimated to affect about 12,280 women in 2017, with 4210 of those cases to be fatal. The 5 year survival rate for cervical cancer, which is the percentage chance of a patient diagnosed with cervical cancer living for 5 years post the diagnosis is 68% with the rate rising to 91% when the cancer has been diagnosed early.

​Causes: A cancer is formed when there is uncontrolled division and growth of abnormal cells. Unlike normal cells that have a set lifetime at the end of which they die, abnormal cells do not die and keep on dividing. This results in an amalgamation of these abnormal cells which forms a cancerous tumor. Till date, scientists have not been able to narrow down on the reason why cells become cancerous. However, with respect to cervical cancers, most of them are caused by longstanding infection of HPV (Human papillomaviruses). HPV is a sexually transmitted infection that is so common that nearly all sexually active people will get at some point of time in their lives.

There are over a hundred types of HPV but only a few have been linked with cancer.​In most cases, HPV will subside and disappear on its own without showing any symptoms but in some women the HPV may stay and cause precancerous changes to the cells of the cervix, also called Dysplasia. If these precancerous changes are treated immediately, it could help prevent the formation of a cancerous tumor.​

- Long term mental stress: Women with high levels of mental stress are found to have a lower ability to combat HPVs.

- Giving birth at young age: women who have given birth before the age of seventeen are at a higher risk to be diagnosed of cervical cancer.

- Several pregnancies: Women who have had at least three children in three separate pregnancies run a high risk of developing cervical cancer.

- Socioeconomic Status: studies have shown that women from developing countries are more likely to be diagnosed of cervical cancer.​

Symptoms:​ Symptoms of cervical cancer do not usually show in the early or precancerous stages. They do however; turn up when the cancer has spread to neighbouring organs and tissues. They include:

- Bleeding or Spotting between periods

Diagnosis:​ Early and effective diagnosis is critical as it could mean the line between life and death for a patient with cervical cancer. Cervical screening, if undertaken effective could and can save lives otherwise lost to cervical cancer. One of such screening tests, a Pap smear (or Pap test) is an ideal way to find the presence of precancerous or cancerous cells on the cervix. It involves scraping off a few of your cells from your cervix and is examined by your doctor. It may be an uncomfortable experience but will not cause any long term pain.

As to when to perform a smear test, doctors recommend that all women between the ages of twenty-one and sixty-five should receive a pap smear every three years, though for women aged thirty and above a combination of a pap test and a HPV test every five years is preferred. If during this screening process abnormal cells were detected, your doctor may perform a procedure called colonoscopy where a lighted microscope is used to examine the walls of the cervix during a pelvic examination.

Along with it a small tissue sample of your cervix is sent to pathologists to look for precancerous changes. If the pathologist confirms a cancer, tests are performed on the basis of the size and extent of the tumor. This may include X-rays, MRIs or CT imaging studies along with other tests.​

Staging:​ As with the case of all cancers, staging them is important as it would give an idea as to the extent to which it has spread in the body at the time of diagnosis. The two systems mostly used to stage cervical cancer, the International Federation of Gynaecology and Obstetrics (FIGO) and the American Joint Committee on Cancer (AJCC ). Both these systems are based on the tumor extent, spread to any lymph nodes and distant spread which are classified in stages from 0 to IV with many subcategories under each. Stage 0: Means that the abnormal cells are only on the walls of the cervix and is not a truly invasive cancer.

Stage I: A small amount of the tumor is present without having spread to nearby lymph node and tissues.

Stage II: The tumor has spread beyond the cervix and the uterus but not the pelvic walls or the lower part of the vagina.

Stage III: Has spread into the pelvic walls and the lower parts of the vagina but no other part of the body.

Stage IV: Cancer has spread to the rectum or bladder or to other parts of the body.​

For advanced stages, a pelvic exenteration is performed where the uterus, surrounding lymph nodes and part of the other organs surrounding the pelvis is removed. Radiation therapy and chemotherapy may be recommended together if radiation therapy is the main medium of treatment. Finally, targeted therapy involves drugs that have been developed to curb the growth of cancerous cells.

The former is usually preferred in early stage cases where the cancer is restricted to the cervix whereas the later is when it has metastasized to other parts of the reproductive system. Short term side effects following the procedure include bleeding, infection, blood clots etc. However, though the instances are rare, there may be long term complications like sex being painful, swelling of the legs and arms, urinary inconsistency and obstructed bowel movement.

Radical Trachelectomy: Involves the removal of the cervix, the upper part of the vagina, and some of the tissue surrounding the vagina. Preferred in cases where the patient plans to preserve her ability to be pregnant. However, it is only possible in extremely early stages of the cancer.

There are three ways the doctor/surgeon may go about the surgery: (a) Vaginal radical trachelectomy [removes the cervix and nearby tissue through the vagina],

(c) Laparoscopic radical trachelectomy [involves removing the cervix and nearby tissue through small incisions with the help of thin tube like machines called a laparoscope.].

Short term side effects include vaginal bleeding and discharge, infections, painful and/or irregular periods, swelling of the vulva and numbness of the thighs. However, long term side effects may include buildup of lymph fluids in the limbs, urinary inconsistency and fertility problems.

Cone Biopsy: This procedure has a dual function: on one end it allows your doctor to take samples from your cervix to examine and determine the state of your cancer and on the other, it is used to remove and treat pre-cancerous and/or small cancers that may be present in your cervix. These biopsies are performed via a colposcopy which involves your doctor making using of a magnifying tool that looks like a pair of binoculars to identify the problem areas in your cervix.

The next step is to remove this area in question, which may be performed in three different ways:

(a) Loop Electrosurgical Excision Procedure (Leep)- involves making use of a thin wire, heated by electricity to remove the cervix

(c) Laser Surgery/ Excision- makes use of a high intensity laser to remove it. This procedure gets the name “cone” biopsy from the cone shaped portion removed which includes the outer part of the cervix closest to the vagina and a part of the pathway from the uterus to the vagina, also called the endocervical canal. There may be a few short term side effects after the procedure which includes vaginal discharge of dark- brown or yellow colour, cramping, infection and bleeding.

However, these can be easily countered with medication and your doctor would recommend sanitary pads for the time being and avoid any sort of strenuous work. The long term effects are, however, a little more prevalent in the case of a cone biopsy, if the patient wishes to get pregnant in the future. As mentioned earlier, cone biopsies allow its patients to conserve their ability to get pregnant while being treated for cancer at the same time. However, this comes at a risk as there have been cases of premature birth and miscarriages in the second trimester. It is thus necessary, you talk to your doctor before you move any forward about either getting a cone biopsy or trying to get pregnant after one.

Pelvic Exenteration: Given a situation where a patient is treated for cervical cancer once before and it returns once again. In such situations, a doctor may recommend a pelvic exenteration which involves removal of certain sexual organs along with lymph nodes present in the pelvis. Based on the extent of the cancer and whether it calls for either the bladder or the rectum or both to be removed,along with the sexual organs (ovaries, fallopian tubes, uterus, cervix, vagina and vulva), there are three types of treatment: (a) anterior exenteration- removes just the bladder,

(b) posterior exenteration- removes just the rectum and

The side effects depends upon what organs were removed but there are a few temporary side effects which may include pain, bleeding, infection etc. However the long term side effects are more common with sexual problems topping the list due to most of the sexual organs being removed and also the inability to give birth or get pregnant.

They may also come with a psychological impact with most patients receiving counselling and psychiatric help post the procedure to help them cope with the new changes that have taken place in their body. Other long term side effects include build up of lymph fluid in the limbs, kidney problems, urinary obstruction, death of tissues etc.

Radiation Therapy: Involves the use of high powered x-rays to kill cancer cells and may be used as the main source of treatment or in addition with another treatment, most often chemotherapy. With respect to cervical cancer there are two main ways in which a patient may receive radiation therapy:

(a) External beam radiation: Radiation is introduced to the body via an external source (a machine) and

(b) Brachytherapy: involves the use of ray emitting seeds that are places in the vagina or cervix to kill off cancer cells. These seeds may be high powered or low powered which may be chosen with respect to a patient’s specific case.

Side effects of external beam radiation include discomfort in the pelvis area, low blood count or anemia, vaginal pain and menstrual changes and side effects of brachytherapy include scar tissue developing in the vagina, vaginal dryness, weakened bones due to radiation and swelling of the legs.

Chemotherapy: Makes use of anticancer drugs introduced to the body intravenously to combat cancer cells and may be performed alongside radiation therapy. Side effects include nausea and vomiting, loss of appetite, loss of hair, mouth sore and fatigue. For women who are pre-menopausal and would like to conceive, it is possible to do so. However, chemotherapy can have an adverse effect during pregnancy and to the child. It is thus crucial to talk to your doctor regarding the same. Also as a woman, who is undergoing chemotherapy, gets closer to menopause, she runs a greater risk of pre menopause.

Targeted Therapy: Involves the use of drugs designed to prevent cancer cells from growing any further: inhibiting the source of nourishment for cancer cells with the help of angiogenesis inhibitors.Side effects include high blood pressure, tiredness and loss of appetite.