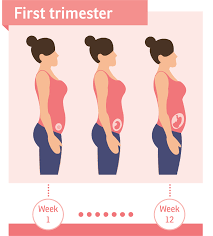 Perhaps you are feeling a bit strange and you are suspecting pregnancy because you had sexual intercourse recently. It could be challenging, trying to figure out what early pregnancy signs appear as. Let us break it down.

Being pregnant is a term every young adult is familiar with. In biological terms, pregnancy is a condition when the sperm from a male is released into the females reproductive system and in the process fertilizes an egg during ovulation. This fertilized egg will then develop into a baby.

It takes more than just a missed menstrual period to indicate that one is pregnant, there are several other signs and symptoms that can help one know if she is indeed pregnant. Although, pregnancy tests and ultrasounds are confirmed ways of detecting pregnancy.

i. Missed Menstruation Period– This is a key indicator of pregnancy due to the fertilized egg. Bleeding ceases during the pregnancy period although, there may be an occurrence of spotting or mild cramping when the fertilized egg is being implanted into the uterus. Some women have menstrual cycles that are irregular and may not take note of their pregnancy until much later.

ii. Fatigue – It is not new for women in their early stages of pregnancy to feel tired, this is as a result of the hormone progesterone which is at a rise at this point of the pregnancy. The good news about this fatigue is that it gets better with the second trimester.

v. Frequent urination– Generally, there is usually an increased level of fluid in the bladder during pregnancy. This is as a result of the increased quantity of blood pumped by the body which makes the kidney process more fluid.

The signs and symptoms experienced by a woman may be the same as another expectant mother of one. However, the severity would differ as the mother-to-be of twins will experience severe signs and symptoms. Ultrasound is a definitive method to confirm being pregnant with twins.

It is a well-known fact that the implantation of the fertilized egg on the uterine walls occurs before a woman misses a period. Before taking note of a missed menstruation period, there are very early signs and symptoms which indicate pregnancy. Signs and symptoms that may occur before a missed period include the following:

A missed menstruation period is a common sign that a fertilized egg has been implanted in the uterine wall indicating pregnancy. There are several other signs and symptoms that a woman can observe in her body to detect pregnancy. They include:

During pregnancy, there will be an increased occurrence of a thin clear or milky-white vaginal discharge called leukorrhea. This is caused by increased hormones and vaginal blood flow which help to prevent infections in the cervix and vaginal walls.

Diarrhea is not a sign of early pregnancy. However, due to the changes occurring in the body during the first trimester, the bowel may be affected. This as well as a diet/nutrition change during the early pregnancy stage could affect the bowels resulting in stooling.