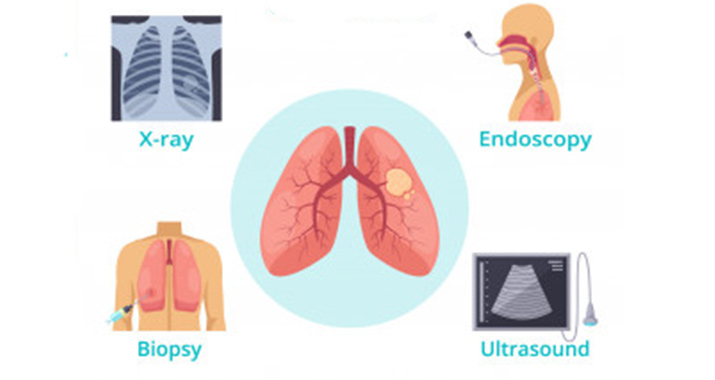 On noticing the title, one would automatically associate lung cancer with cigarette smoking. Your intuition, thanks to the strict regulation and successful public awareness campaigns, does hold true. What was once considered the apex of manliness and a tool to boost morality among US troops during World War II is being frowned upon in most developed nations.​

Although death rates due to lung cancer in the US caused by smoking has fallen (by 43 per cent in men and 17 per cent in women since 1990, thanks to decrease in smoking); lung cancer continues to be leading cause of cancer death in both men and women and the second most common cancer overall. To further prove the deadliness of cancer, take a look at the following statistics for the year 2016 with respect to the United States: - Out of the total number of patients diagnosed with cancer, 14 per cent are lung cancer cases. - 1 in 4 cancer related deaths is due to lung cancer. - An estimated 155,870 (84,590 men and 71,280 women) deaths due to lung cancer in 2016 among US citizens. - The five year survival rate which is the percentage likelihood of an individual diagnosed with lung cancer surviving for five or more years from the day they were diagnosed. This rate for lung cancer in the US is about 18 per cent, meaning eighteen patients out of a hundred patients diagnosed with cancer are likely to live for more than five years. This rate is distinct across the genders with it lying around 15 per cent for men and 21 per cent for women.

However it is to be mentioned that this rate depends upon several factors like the kind of lung cancer and its stage, all of which will be discussed below. Before we deal with lung cancer, let us look at the lungs and its functions. The lungs are basically air filled spongy organs on either side of the chest which is in charge of exchange of oxygen and carbon dioxide between the body and its external environment. When you inhale, the air flows through the trachea (windpipe) and into the lungs via its tubular branches called bronchi. These bronchi split even further until they are microscopic, at which point they are called bronchioles and end in a cluster of microscopic sacs called alveoli. At these sacs, oxygen from the air taken in is absorbed into the blood, and carbon dioxide, a byproduct of the body’s metabolism, is removed via the same pathway. With the advent of cancer, the normal cells that comprise of the lungs are converted into abnormal cells, for reasons scientifically unknown and begin developing at a rapid rate. These abnormal cells, then spread to the neighbouring region and form what is called a tumour.

The presence of a tumour, if large and numerous, can affect the normal functioning of the lung and its ability to provide oxygen to the bloodstream. However, there are two kinds of tumours: a benign tumour is one which remains in one place and does not spread or appear to spread whereas malignant tumours are those that spread to different parts of the body, either via the bloodstream or the lymphatic system. This is the most dangerous kind of tumour as it spreads easily, a process called metastasis. However, benign tumours can be treated easily via surgery. With regard to liver cancer, the tumour usually associated with it is malignant in nature. Also, liver cancer has the tendency to spread very early after it forms, making it an extremely deadly disease to cure.

The most common areas for lung cancer to metastasize are the adrenal glands, brain, bones and liver, although it is to be noted that that lung cancer can spread to any part of the body, thanks to its intimate relationship with the bloodstream. In such cases, it is a case of primary lung cancer. However, if the cancer where to originate from another part of the body and metastasize to the lung; then it is not called a lung cancer, rather it is named after the organ/tissue it originated from. All lung cancers that fall under this category are called secondary lung cancer. Also, lung cancer can also originate from any part of the lung, with 90 per cent-95 per cent of the cases originating from the epithelial cells: the cells that line the walls of the bronchi and bronchioles. It is for this reason that lung cancer may also be referred to as bronchogenic cancers or bronchogenic carcinomas.

Bronchogenic Carcinomas are divided into two categories, based on the size of the tumour it represents, namely small cell lung cancer (SCLC) and non-small cell lung cancer (NSCLC) . The size in question that defines these two categories is on a microscopic level. SCLC is seen in about 20 per cent of the total patients diagnosed of lung cancer. However, it is the most aggressive of the bunch with it most commonly seen in smokers and only 1 per cent of non-smokers.

In most cases of SCLC, the cancer is only discovered after it has spread to other organs and tissues. NSCLC on the other hand is relatively more prevalent with about 80 per cent of the total cases being cases of NSCLC. Based on the type of cell found in the tumour, it can be divided into the following subcategories:

Lung cancer has no specific symptoms: it depends on the extent of the cancer and where it is. In some cases it might exhibit pain in the patient; in others the patient won’t even realize the presence of lung cancer until he/she is diagnosed of it during a routine check-up. However, the possible symptoms can be narrowed down, along with its respective reasons, as follows:

- No symptoms: As mentioned earlier, lung cancer may not reveal any kind of symptoms unless during a routine check-up. In an X-ray or MRI the tumour turns up as a coin shaped image giving it the name ‘coin lesion’. Cancer related symptoms: This is based on where the cancer has affected: for instance if the cancer affects the surrounding lung tissue, it may lead to breathing problems, if it affects the nerves, then it could either lead to shoulder pain or hoarseness of the voice due to paralysis of the vocal cords.

Finally, if it affects the oesophagus, it could lead to trouble swallowing. - If cancer has metastasized to other parts of the body: For example if the cancer has spread to the bones, it could cause intense pain and stress at sites of bone involvement. Para-neoplastic symptoms: Sometimes, lung cancer may be accompanied by symptoms that are due to the production of hormone like substances by the tumour cells. - As we know, a cancer is formed due to formation and spread of abnormal cells in that organ (in our case, the lungs). This is due to the fact that abnormal cells, unlike its normal counterpart does not die and goes on multiplying and alienating neighbouring normal cells.​

Though no formal cause has been found to cause cancer, it can be instigated by the following two reasons:

If your doctor feels that you run the risk or are exhibiting symptoms common to lung cancer, he/she might want you to run a few tests so that he can target your specific case and work to cure it effectively.

Tissue Sample (biopsy): Taking a sample from the cancerous region with the help of a needle and analysing it.​

Once diagnosed, the next step is to stage the cancer. This gives the doctor a brief idea as to what kind of medication or treatment is right for you. Your case may fall under the following stages:

Stage I: The tumour is less than two inches in size and the cancer is limited to the lungs without it having spread to the neighbouring lymph nodes.

Stage II: There are two conditions that may qualify a cancer to be stage II namely if the tumour is larger than two inches or has a smaller tumour that has involved nearby structures like the chest wall, the lining around the lungs or the diaphragm. It may or may not have spread into the lymph nodes.

Stage III: The cancer has grown large and has affected neighbouring regions or smaller tumours have developed in lymph nodes further from the lungs.

Stage IV: Cancer has spread beyond the lungs to either the unaffected lung or any other distant tissue or organ.​​

Based on all the information gathered by your doctor via your tests and understanding the stage of your cancer, your treatment option may include one or more of the following:

Surgery: In a surgery, your surgeon may remove the cancerous region in your lungs along with a margin of healthy tissue. A surgical procedure is usually apt for early stage NSCLC, given it’s relatively non-aggressive nature and its likelihood of effectively removing the most of the cancer from the lungs. The kind of surgery performed is based on which part of the lung is affected by the cancer:

Makes use of drugs designed to combat certain complications of cancer. Though it may seem that it overlaps with chemotherapy, that isn't the case as unlike chemotherapy, these drugs are designed to affect certain features of a cancer cell. The drugs thus used are differentiated on the basis of which function or part of the cancer cell it affects: - Angiogenesis: drugs that affect the blood supply of the tumour. - Drugs that affect the epidermal growth factor receptor, a protein found on the tumour that is in charge of signalling the cells to divide and multiply. These drugs inhibit it to receive the signals thereby limiting the tumor. - Drugs aimed at cases with ALK gene rearrangement, most commonly seen in smokers. These drugs come with their own specific side effects. Though they may not be as intense as those seen in chemotherapy or radiation therapy, it may still be present and may include: nausea, vomiting, fatigue,skin sores, diarrhea etc.