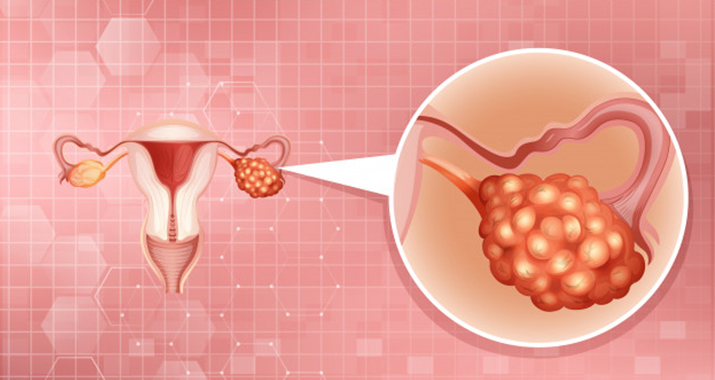 With around seven thousand four hundred new cases registered in 2014 alone, ovarian cancer is the sixth most common cancer and the fifth most common cause of death in females in the UK in 2014. Out of 100 females, only 35% survive for ten years or more. However, if ovarian cancer is diagnosed in individuals less than forty years of age or in its earliest stages, then the chances of living for more than ten years is about nine out of ten. Coupled with this, ever since the 1970s, the mortality rate of ovarian cancer patients has fallen drastically, thanks to advancement in medicine and public awareness about the condition. This only proves to show that the complications of ovarian cancer can be avoided if diagnosed early and given the right treatment.

​ Causes and Types of Tumours:
​ The female reproductive system comprises of the ovary, the fallopian tube, the uterus, the cervix and the vagina. The ovaries present on either side of the uterus, stores egg cells called ova or oocytes that on fertilization by sperm, move along the fallopian tube and embed itself on the walls of the uterus, from which the fertilized egg receives nutrients from. The ovaries also produce the hormones necessary to facilitate this process.

A cancer involves a genetic mutation of the cells, where the normal cells that would otherwise comprise the tissue or organ (in this case ovary) is converted into abnormal cells that do not follow the norms of a normal cell i.e. die at the end of its life span; rather it spreads to neighbouring cells, multiplying quickly and forming masses called tumours.

These tumours aren’t confided to their own tissue or organ and can spread or metastasize to other organs. With regard to ovarian cancer, there are various types that may affect an individual, based on the type of cell present in the ovary it originates from namely: Surface Epithelium (cells that cover the outer lining of the ovaries), Germ Cells (cells that will eventually form into eggs) and Stromal Cells (responsible for releasing hormones and connecting various structures of the ovaries). The tumours associated with them are as follows:

Epithelial Tumours: This is the most common and dangerous type of ovarian cancer accounting for about 85- 90% of all the cases and originates from the surface epithelium. There are a few cases where the tumour formed is benign (noncancerous); however in cases when they are cancerous or carcinomas, about 70%, tend to go unnoticed until an advanced stage.

Germ Cell Tumours: Originating from the germ cells of the ovaries, most cases of these types of tumours are benign in nature. However, there are cases when the tumour is cancerous and can be life-threatening with the most common germ cell cancers being maturing teratomas, dysgerminomas and endodermal sinus tumours. Also, this type of tumour is prevalent mostly in teenagers and women in their twenties. On the bright side, however, most cases of germ cell tumour can be cured and fertility preserved.

Stromal Tumours: Affecting the Stromal cells, these are a rare type of cancer that is usually considered low-grade cancers with about 70% of them presenting themselves as stage 1 cancers: cancers that are limited to one or both the ovaries. Common types of stromal tumours are: granulosa-theca tumours and Sertoli- Leydig cell tumours.

Others: If diagnosed in its early stages, the above tumours can be cured by removal of the ovaries. However, this does not eliminate the risk of primary peritoneal carcinoma: which is cancer closely related to epithelial ovarian cancer with similar symptoms, spread and treatment but develops on the cells lining the peritoneum which is the abdominal lining.

Age: The prevalence of ovarian cancer is higher in women older than sixty five years of age.

Infertility or fertility Treatment: Though no concrete information is available with regard to which one: fertility treatment or infertility itself causes ovarian cancer, a relation has been established that it may lead to a higher risk of ovarian cancer.

Breast Cancer: Women diagnosed with breast cancer have a higher risk of being diagnosed of ovarian cancer later on.

Obesity/overweight: Known to increase the chances of developing cancers.

Endometriosis: Is a condition where the tissue that lines your uterus (called endometrium) grows outside your uterus and induces pain.Women who develop it have a 30% higher risk of being diagnosed with ovarian cancer compared to other women.

​ Symptoms:
​ Ovarian cancer, as mentioned earlier, is difficult to diagnose in its early stages. This is due to the fact that the ovaries are deep within the abdominal cavity which means that for it to cause any significant symptoms; the tumours have to grow large enough, something that is only prevalent in later stages. When symptoms do show, they may include the following:

- Bloating. - Pelvic or Abdominal Pain. - Trouble eating or feeling full quickly. - Feeling the need to urinate urgently or often. Other symptoms may include pain during sex, fatigue, constipation, menstrual changes, back pain, upset stomach or heartburn. If you are exhibiting any of the above symptoms, it is wise to visit your doctor or gynaecologist to get it checked, though it does not confirm a cancer. However, if the symptoms are persistent, it is guaranteed that something is wrong and a delay in visiting your respective medical expert may prove dangerous.

​ Diagnosis:
​ If your doctor suspects ovarian cancer they would first perform a vaginal examination looking for abnormalities in the uterus or ovaries. Coupled with this they may recommend the following tests: - Ultrasound - Blood tests - MRI - CT Scan - Laparoscopy: involves inserting a thin flexible tube with a camera at its end through a small incision in the lower abdomen. - Colonoscopy: A doctor may rarely recommend a colonoscopy: involves an examination of the large intestine, if the patient is suffering from constipation or rectal bleeding. - Abdominal fluid aspiration: if the patient's’ abdomen is swollen and the doctor suspects a buildup of fluid there, then they may recommend this test.

​ Staging and Grading:
​ Once diagnosed, the doctor tries to stage cancer and also grade the tumour. The stage of cancer, gives the doctor an idea of how cancer has spread. It is divided into four stages, namely:
Stage 1: The earliest stage, this involves the cancer being confined to the ovary or the fallopian tube. Stage 2: Involves both ovaries being affected along with pelvic extension. Stage 3: Involves one or both ovaries being affected and the cancer having spread beyond the pelvis. Stage 4: Cancer has spread widely throughout the body. Grading involves the doctor comparing the cancerous cells with the healthy ones and defining how healthy the cells are via a microscope. The cells are rated as follows: GX: The grade cannot be evaluated. GB: Is borderline cancerous. G1: Is well defined with many healthy cells. G2: Is moderately defined with more cells being abnormal than normal G3 and G4: Is poorly defined with more cells being abnormal or lack of normal cells thereof.

​ Treatments:
Based on the stage and grade of cancer, and the specific case of the patient, the doctor will recommend one of the following procedures:

Surgery: The most recommended procedure of them all, surgery involves removing both the ovaries, the fallopian tube, the uterus, nearby lymph nodes and the omentum: a fold of fatty tissue in the abdomen. Also referred to as total hysterectomy or bilateral salpingo-oophorectomy and would mean that menopause starts immediately. However, if the cancer is just confided to one of the ovaries, the surgeon may just remove that ovary and the adjoining fallopian tube. In such a case, the woman will still be able to conceive. This also the preferred method for stage 1 ovarian cancer. For this treatment methodology, staging is critical, as it helps the surgeons know the extent of your cancer. This thereby allows them to remove the entire tumour.

However, with larger tumours and surgeries performed in cases where the cancer is in later stages, the entire tumour may be difficult to remove or it has micro metastasized to various parts of the body. In such a case, the remaining cancer is removed via chemotherapy or any other treatment procedure. These treatments may be performed before or/and after the surgery. Finally, for advanced cases, the colon or a part of the colon may be affected and thus may be required to be removed. A colonoscopy is thus performed. Side effects, besides the ones mentioned, include hot flashes and vaginal dryness a consequence of menopause. However, these effects can be countered with hormonal therapy.

Chemotherapy: Involves making use of chemicals to kill cancer cells by preventing them from growing and multiplying. Treatment involves three to six sessions, given between three to four weeks, so as to allow the body to heal. Chemotherapy may have some side effects that would usually end after the treatment procedure: these include nausea and vomiting, loss of appetite and hair, hand and foot rashes and mouth sores. For certain individuals, some of the drugs used for chemotherapy may lead to kidney damage. Finally, chemotherapy tends to have negative impact on the immune system of the body which may lead to increased chance of infections, extensive bleeding after minor cuts and fatigue.

Targeted Therapy: Involves the use of medication “targeted” at affecting the pathways or functions of the cancer cells. They are more effective as they limit damage to normal cells, thus reducing side effects. Hormone Therapy: May be used to prevent oestrogen from reaching the cancer cells thereby limiting the growth of cancer. May be administered on patients who have removed their ovaries via surgery so as to compensate for the mismatch in hormones.

Radiotherapy: The least effective treatment procedure of the bunch, this is only used to cure trace amounts of cancer present in the reproductive system (8). Side effects for this procedure are mostly temporary and may include fatigue, diarrhoea or an inflamed bladder making the patient sensitive to certain fluids due to the thinning of the bladder walls. These symptoms may get progressively worse throughout the procedure but may ease out once it comes to an end.
Get Free Estimate