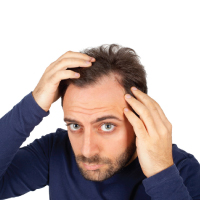 WHAT IS A RECEDING HAIRLINE?

A receding hairline is one of the first signs of baldness after the development of a mature hairline. It can be a result of a variety of factors. It can occur in both men and women, though more common in men.

A receding hairline can start developing in men as they age. It is normal for a man’s hairline to move slightly higher above his forehead. This typically starts happening in men between the age of 17 and 30.

Hairline hair loss is usually a natural process of aging. A post in the Journal of Investigative Dermatology says that 80% of European men may have a receding hairline when they are 80 years old.

This may be a condition that would kick off hair loss in both men and women. DHT is a hormone that may be linked to male pattern baldness because it causes the follicles to shrink to the point that hair no longer grows in them anymore.

This, including medications, may sometimes lead to hair loss. Chemotherapy makes hair follicles fall out at certain times.

Telogen effluvium is an illness or stress that leads to sudden hair loss. People experience this unexpected shedding, where they lose much more hair than usual in a short period. However, this hair loss may reverse back without treatment over time.

Some cases of receding hairline may be genetic. Men with a family history of baldness often experience hair loss which may follow a similar pattern.

Smokers experience hair loss faster than those who don’t smoke. Dieting may also play a role. Foods deficient in protein can cause hair loss. People who eat enough protein may have healthy hair.

Several features define hairlines in women and men, such as shape and height. Everyone’s hairline is different and distinctive but typically falls within one of several categories. Multiple factors affect hairlines, including age, hormones, genetics, and lifestyle habits. Any hairline can be styled to look attractive.

The types of hairlines are divided into two groups; one for men, and the other for women.

This is relatively close to the eyebrows and considered low. Women with this type have narrow or short foreheads. This is a great benefit since hairlines recede with age.

This begins high up on the crown of your forehead. Often caused by genetics, it could also be caused by hair loss.

Also known as average or normal hairline, it sits in the middle of the forehead and seems to be the most customary type.

This has a distinctive V-shape, either inherited or as a result of several rare genetic disorders such as frontonasal dysplasia. It may become more or less prominent with aging.

A common phenomenon of this hairline is lack of symmetry. One side may be slightly higher than the other. Hairlines may also zigzag slightly or significantly. Uneven hairlines may be caused by genetics. They can also be a result of hairstyling practices. A hairline can also be uneven when your hair starts to recede.

Also known as rounded or oval-shaped hairline, it is typically symmetrical and may make your forehead appear long in shape. It has a curved look, with no uneven lines.

This runs straight across the forehead and is rectangular. It is also known as the juvenile hairline.

Also known as receding hairline, this is less common in women than in men. However, they are not rare and can be caused by genetics, hormones, stress, or lifestyle habits. A female receding hairline is different from female pattern baldness (androgenic alopecia).

A receding hairline may have hair that stops growing at one or both temples, giving you the M-shape. More of your forehead may also be exposed. Lifestyle practices like wearing two tight hairstyles daily for years can cause a hairline to recede.

This situation may be temporary or permanent and is known as traction alopecia, which may most likely occur if you regularly treat your hair with chemicals.

Hormonal changes associated with menopause may play a role in receding hairlines. Your hairline may recede slightly at the temples after pregnancy. This, however, is often temporary.

Males may likely have any of the hairline shapes of women. However, theirs can change much more strikingly over time. Most commonly hairline types in men can likely include:

This is common in boys and young male adults yet to experience hair loss. If it runs straight across the forehead, it is known as a juvenile hairline. Low hairlines are relatively close to the eyebrows.

This is common in men during their teens and 20s. It is sometimes asymmetrical or uneven. It may look straight or rounded.

These are swirls of hair that grow in a direction other than their surrounding hairs. They may occur anywhere on the scalp but are often found at the crown or hairline. They occur in both males and females but are more commonly seen in men who have short hair and a few styling options.

Receding hairline in men (also known as male pattern baldness) is a hereditary trait, caused by interaction between hair follicles and hormones like testosterone. This condition is also known as “androgenetic alopecia”.

Males may notice their hairline begin to recede after puberty. Receding hairlines appear as high hairlines showing more scalp as they recede. They cause a deep M-shape if striking hair can recede occur at the temples.

(How To Stop Receding Hairline)

These are some of the ways to prevent or regrow receding hairline:

There are specific types of laser therapy to stimulate hair growth along the hairline.

Before you embark on treatments or any option to change your hairline, consult your doctor to recommend the one most suitable for you. Some medications have serious side effects. A receding hairline can be distressful to some individuals. Your doctor may help to determine its underlying cause and recommend helpful treatments.

But there’re some telling symptoms to above, for example, losing a lot of hair is one such symptom. It is common for people to lose dozens of hairs daily.

Changing your hairline may involve medical and at-home (or over-the-counter) treatments which include strategic hair styling and haircuts, laser hair removal, electrolysis, shaving, tweezing, microblading, medications (such as Rogaine, Finasteride, or Dritho-Scalp), essential oils, as well as hair transplant.